The Economics of Sport
We were delighted to find our website has attracted some international followers.  As a result we decided to put together this primer to help explain gaelic games to an international audience.

The Games of Gaelic Football and Hurling

Gaelic football is a 15-a-side invasive team sport played with a ball of similar dimensions as that of Association Football (or Soccer). The playing area is rectangular-shaped playing area with dimensions of 130-145m in length and 80-90m wide. The scoring area is H-shaped goalpost with the vertical posts 6.5m apart and the horizontally bar at a height of 2.5m above the ground.  A team is awarded one point if it succeeds in getting the ball to cross the scoring zone above the crossbar and the team is awarded three points (called a goal) if it succeeds in getting the ball to cross the scoring zone below the crossbar. The team with the highest combined total of goals and points at the end of the game is deemed the winner. Players can hold the ball in their hand(s) for up to four steps before they must play it against the ground or their foot while retaining possession or they can transfer it by striking it with their hand or foot.

Hurling is similar to gaelic fooball in many ways. Both are 15-a-side invasive team sports.  Both have identical playing areas, scoring zones, and scoring methods.  However, hurling is a stick and ball game.  The ball is similar in size to a baseball or hockey ball but slightly lighter and has small rims on it.  Hurling is played with a hockey/shinty style stick that has a larger striking area of approximately 15cm wide at its widest point and striking of the ball is permitted with both sides of the stick. The length of the stick depends on the height of the player. It is usual for adult player to have a hurley stick of 35 inches or so. Players can hold the ball in their hand for up to four steps before they must play it against the stick.  Players can only retain position by playing it from hand-to-stick-to-hand once – although the ball can remain balanced on the stick before being transferred back to the hand. 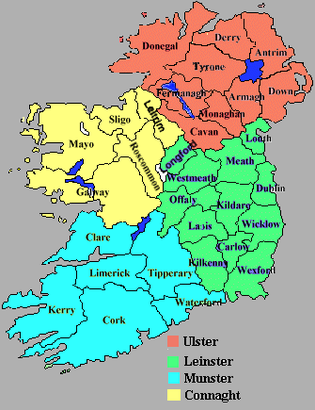 The governing body with responsibility for gaelic football and hurling is the Gaelic Athletic Association (GAA).  The core unit of the GAA is the club that represents a relatively small geographical area.  The island of Ireland is just over 32,500 square miles and there are 2,163 clubs.  This gives an average size of 15 square miles per club but in urban areas it is much smaller.

With relatively rare exceptions the members of the club team have to reside within the club’s geographical area.  Club players may be selected to play for the county team.  In doing so the represent the county.

The most popular games and teams in the GAA are county teams.  Inter-county GAA is organised along representative lines in a manner similar to that of international sport.  There are 32 county teams on the island of Ireland as can be seen in Figure 1.  The 32 counties can be grouped into 4 provinces. The provinces are Connacht, Leinster, Munster and Ulster.  These are also presented in Figure 1.

The primary competitions in gaelic games are single game  elimination tournaments (or cup competitions).  The pairings for provincial games are  sometimes decided by open draw and other times by seeded draws.

While teams also play leagues, these leagues are deemed of secondary importance by virtually all members of the association.

The primacy of the cup competitions is probably a function of the power structure of the organisation and its amateur principle.  In his book Playbooks and Checkbooks Stefan Symanski (2009) argues that traditionally fans prefer elimination tournaments but that these preferences held less sway as teams  gained more power and sought ‘fixity of fixtures’ that leagues provided.  He suggests that this is the main reason that the competitions for professional team sports are organised on a league basis whereas individual (non-team) sports, where the competitors have less power, tend to be organised using elimination tournaments.

In many ways the representative nature of the games require the primacy of the elimination tournament.  While it is rare, it is not uncommon for a good young player to be a member of 10 teams or more.  A good 17-year old might be a member of their club u-18, u-21, and adult teams in both hurling and gaelic football.  This is six teams.  They might represent their county in both sports at u-18.  The total is now eight.  They will probably also play with their school teams in both codes.  Now they are playing on ten different teams. To facilitate the completion of the competitions for these teams the player will play very few league games. Where the player’s teams are successful then there is fixture congestion because the GAA facilitate the player in all championship competitions by scheduling gaps between games.  The whole system survives because of (i) the smaller number of games teams play on average in cup competitions, and (ii) the fact that 50% of the teams will be eliminated at each round.

To appreciate it all the more...

Some video clips highlighting the skills of hurling and gaelic football.